Hebron Rehabilitation Committee set up its legal Unit in 1996 to be competent to carry out and follow-ups legal to provide protection for Palestinian civilians in the Old City in 2004 . It has been expanded and the legal functions undertaken by the Legal Unit has been the use of two lawyers with a view to using all available legal mechanisms at the local level and international level to ensure the rights of citizens and protect their property

Legal Unit funded by the Norwegian Government grant renewable annually for 5 years, have been developing and expanding the work of the Office through the development of a range of important activities such as: field research, Awareness Committee, Documentation.

- The objectives of The Legal Unit:

1- Dealing with all Israel military orders in all its forms, especially orders closures, attacks on property of historical, religious, confiscation of Palestinian property, the seizure, to prevent the restoration, housing and others.

2- Raise awareness of the Palestinians their human rights and ways to counter attacks, the Israeli army and settlers against them.

3- Documenting violations of the Israeli occupation authorities and settlers against Palestinian citizens and their property. And to expose their practices at the local, regional and international levels.

4-  Provide protection for Palestinian civilians and their property by using the legal mechanisms available at the local and international level.

- Functions of The Legal Unit:

1 - Documenting the Israeli violations: -
Where the legal Unit is to monitor attacks, the Israeli army and settlers against Palestinian civilians recurrent and go to the sites of attacks to document and include them in periodic reports.

* Dissemination of legal awareness among the citizens need to use their right to file a complaint to the Israeli police immediately after exposure to attacks.
* Help citizens to lodge complaints through the police station to accompany them ,to guide them in Israeli and make statements.
* For this purpose, Hebron Rehabilitation Committee has contracted with a lawyer from the 1948 occupied territories to keep track of these complaints on an ongoing basis until the last grade.

4 - Petition and prosecution before the Israeli judiciary:
The Legal Unit in collaboration with lawyers from the 1948 occupied territories, raising petitions and lawsuits against the attacks of the Israeli army and settlers to the Israeli courts competent.

5 - The use of international legal mechanisms

* expanded its legal powers in an attempt to take advantage of the judicial applications of the international law of humanitarian law and international human rights.
Preparation for citizens complaints of the United Nations / Human Rights Council, in cooperation with human rights organizations partner.

* Preparing a file for the accountability of Israeli war criminals before the courts in foreign currencies.
6 - Resolving legal issues relating to the restoration of buildings

Since the renovation of buildings and relocation of citizens in the old town is one of the most important objectives of the Hebron Rehabilitation Committee, the Legal Office regulates the legal relationship between the owners of restored buildings and the Committee, by and between the Commission and the beneficiaries of the housing of the other. 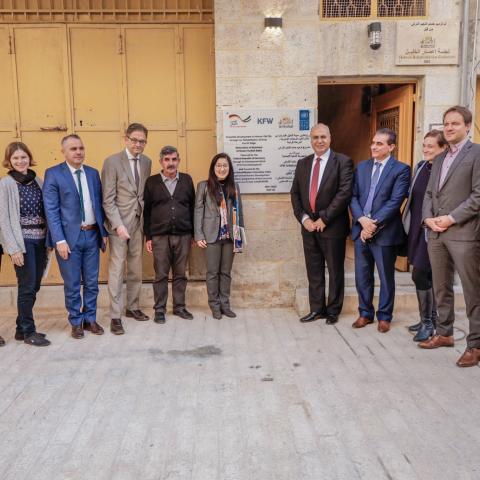